You are here > Big Volcano Visitor Guide / Documents / About Us 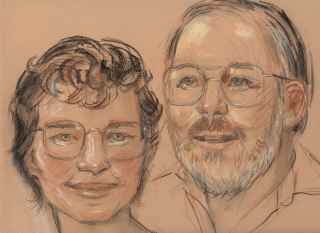 The principals in Big Volcano® Tourism Marketing & Media are David and Jo-Ann Palmer.

David first came to Australia from Canada in 1970, bringing with him extensive experience and success as a commercial photographer, graphic designer and marketing consultant.

Seeing the opportunities opening up in the computer industry in the mid 1980s, he bought an Apple IIC, joined a DTP company and later went on to sell hardware and software at government and corporate level for two of Australia's leading distributors.

Originally from New Zealand, Jo-Ann Palmer arrived in Australia in 1985, and was soon travelling around New South Wales before discovering the subtropical delights of the north coast.

After working in Sydney for several years, the couple bought 4 hectares of remnant rainforest adjacent to the Gondwana Rainforests of Australia World Heritage listed Border Ranges National Park, and finally escaped the big smoke for their patch of paradise in 1994.

Realizing the promotion potential of the WWW for regional tourism operators, the couple spent 14 months researching the 'net before launching their Big Volcano site in July 1997.

The purpose of Big Volcano Tourism Marketing & Media is to foster appreciation, understanding and conservation of the natural environment, through profitable tourism which uses ESD best practice management to sustain the culture and well-being of our local communities.