The discovery of a new rainforest tree in the forests of the Nightcap Range in far northern New South Wales has excited the botanical world, and focused a spotlight on the spectacular Mt Warning Caldera and its World Heritage National Parks and Reserves.

Perhaps we shouldn’t be surprised that this rugged area of NSW still has mysteries to reveal and stories to tell. After all, this is one of the most important moist forest refugias on the continent, with both a shared ‘Gondwanic’ evolutionary history, and millions of years of in-situ evolutionary history.

The Mt Warning caldera area is one of the most significant biodiversity hotspots in New South Wales”, and is subsequently one of the most important sites for rare, restricted, threatened, and endemic (local) species.

The forests of these mist shrouded mountains contain many species with very limited distributions, and a number which are threatened and endangered.

One person who knows this country well, and has spent much of the last 25 years exploring the mysteries of its hidden places and species is Robert Kooyman. A local botanist and forest ecologist, Kooyman worked first as a Forest Ranger and later as a Forest Ecologist in these mountains, and came to know the country and the species intimately.

He was aware of the incredible diversity and ancient lineage of these forests, and the growing paleo-botanical literature describing the past dominance of the Gondwanic rainforest flora on the Australian continent. In an attempt to better understand the forests which exist today, he would try to imagine the forests of the past and the suite of species which were present in them.

The forests carry their long evolutionary history with them. Shaped by the vagaries and vicissitudes of climate change over millions of years and subjected to the extremes of the Pleistocene drought sequences, the moist rainforest flora which once dominated the continent retreated to, and persisted, only in the wettest and most fire protected sites (the ‘refugia’).

The Nightcap Range on the southern flanks of the Mt Warning caldera is one such place. The terrain and flora and fauna of this area provide a living connection to a long evolutionary history, and combine to produce an evolutionary ‘hotspot’.

There is also a rich human history, beginning with aboriginal people and their intimately evolved understanding of country, through to scientists (including botanists and ecologists) keen to unravel and understand some of the mysteries of these complex adaptive natural systems, known to us as ecosystems. 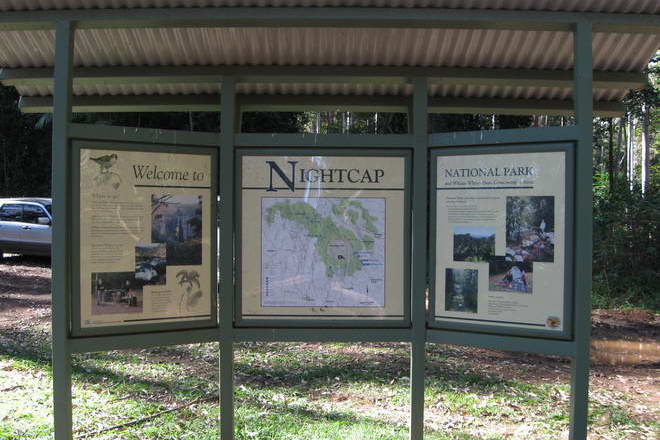 Kooyman fortuitously found himself in the company of some of the leading lights in rainforest research early in his career. Legendary figures in ecology and botany such as Len Webb, Jeff Tracey, and Alex Floyd were early and important influences and supporters of his growing interest.

Ironically it was Jeff Tracey (while working with Len Webb over 30 years ago) who first collected a specimen of this new species from the Nightcap area, which when sent to the Queensland Herbarium, was thought to be a species of Corynocarpus. This leaf specimen lay happily undisturbed in a brown folder in the Queensland Herbarium until 1988 when Kooyman collected similar material in the Nightcap area.

Again this was just leaf material from a young plant and again it was placed in the same family (Corynocarpaceae), primarily because of the persistent spiny teeth on the juvenile growth.

Then in the year 2000, while undertaking research on the rainforests of the Mt Warning area in the company of botanist colleague, Andrew Benwell, the species was located again as a juvenile sapling, but this time there were more, and some were large rainforest canopy trees. The prospect of resolving this enduring biological mystery on the Nightcap made the moment particularly exciting.

What then followed was an accepted and universal process in the botanical sciences of collecting as much information and as many identifying features as possible to help identify the family, and perhaps the genus the species belonged to. After scanning the crowns with binoculars for flower or fruit material and collecting leaf material it was time to depart.

The following day Kooyman returned in the company of local botanist and ex-sawmiller Barry Walker and continued the search for answers. He made what botanists call a ‘bark cut’, this is done by making a small horizontal cut with a sharp knife and then a second cut to remove a small wedge of bark and the outer wood layer. The bark cut exposed oak flecking and what are called medullary rays in the wood of the tree, characteristic of the family Proteaceae.

Once he recognised the family, they immediately began to search for evidence of persistent fruits on the forest floor. In only a few minutes more than ten nuts had been located and as Kooyman recounts “I sat in the leaf litter with a silly grin on my face letting the facts slowly sink in”. 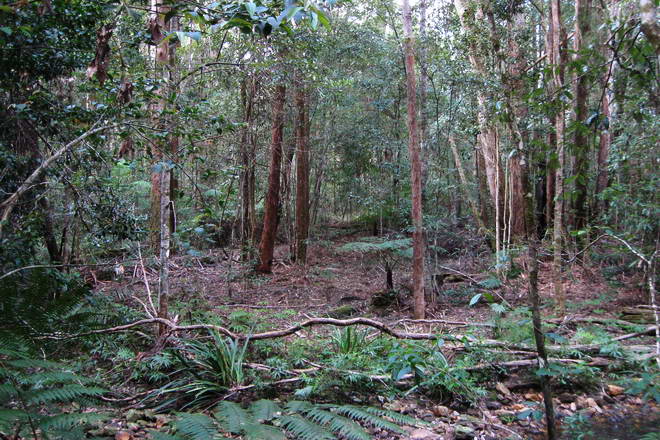 It was time to get comfortable with the thought of a new addition to the rainforest family as we know it. Ironically a new addition which represents probably one of the oldest ‘southern’ flowering plant lineages of them all. What followed was a steady accumulation of information pointing straight at the discovery of a new species in the important family Proteaceae.

That night Kooyman scanned images of leaf material into the computer, sorted through the botanical literature to try to identify the genus, mapped locations, recorded the vegetation and site data he had collected, and wrote emails (including attached images of the leaves) to several botanist friends and the herbariums in Sydney and Queensland. Rainforest botanist Alex Floyd replied promptly that in light of the evidence it did indeed look like a new species in the Proteaceae.

Kooymans subsequent email was cryptically titled - “Another daughter of Proteus?” (alluding to the genus Eidothea). The family was known, but was it a new genus, or a new species? Additional material was collected over the next few days, and dried and pressed specimens were sent off to Gwen Harden at the Royal Botanic Gardens in Sydney.

Gwen contacted Peter Weston who specialises in the Proteaceae and other ‘archaic’ families of ‘southern’ flowering plants and put him in touch with Kooyman. A rapid succession of discussions and the dispatch of additional specimens to the herbarium, including leaves, immature buds, nuts, and a piece of wood retrieved from a fallen stem, resulted in Peter Weston agreeing that it was indeed a member of the genus Eidothea, and very likely a new species.

Within a few weeks Peter was on his way up to northern NSW accompanied by Richard Johnstone (chief horticulturalist) from the Mt Annan Botanic Garden (an annexe of the Royal Botanic Gardens).

The trees were in flower and the timing looked good. Specimen and cutting material for propagation was collected and the first phase of recognition for this addition to the Australian flora was complete.

For years Kooyman had pondered the possibility of another Proteaceae hidden in the mountains of the Nightcap or Border Ranges. “Growing as they do on acid volcanics (rhyolite), these forests have strong affinities to the forests on the granitic uplands in Far North Queensland which are rich in the archaic Gondwanic flora, and especially so in the family Proteaceae”.

However, there was always a problem with that theory. The Proteaceae are generally very showy, with many rainforest species having large lobed leaves and a spectacular silver or gold leaf undersurface as well as other easily distinguished features. If there was another member of the Proteaceae out there, it was going to be cryptic, rare, and obscure.

The prediction proved to be correct. The genus Eidothea in the family Proteaceae was only described in 1995 by Bernie Hyland and Andrew Douglas from specimens collected in far North Queensland. Hyland had found fruit (nuts) of the then unknown species on the flank of Mt Bartle Frere during the early 1960’s.

He collected specimens and had retained the nuts for over twenty years before finally identifying the source tree. The tree was quickly identified as belonging to the family Proteaceae but it was obviously not closely related to any other rainforest member of that family. When asked why it had taken so long to clarify the species, Hyland replied that there was little to distinguish the tree from hundreds of others in the area. A really exciting find.

More interesting still was the fact that a mystery fossil nut the size of a cricket ball had been described by the eminent botanist Baron Ferdinand von Mueller in 1875. The fossil was discovered in the goldfield diggings around Ballarat and has been tentatively aged at 15 to over 20 million years. Mueller described the fossil species and named it Xylocaryon lockii.

When scientists looked closely at the fossil nut they noted the unique intrusion of the wall of the nut into the area of the embryo, something akin to the inside of a walnut. The nuts from far north Queensland shared this feature, and many others. Somewhere back in time these species had a common ancestor which was relatively widespread (from South Australia to North Queensland) and now there was a living relative.

Bernie Hyland and Andrew Douglas described the new species and named the genus Eidothea after a daughter of the Greek god Proteus, for whom the family is named. Legend has it that Proteus was able to change his form at will and thus confuse his enemies.

Members of the family Proteaceae are often characterised as having this capacity for change as juvenile foliage is often very different from the mature form. The species name zoexylocarya refers to the living tree (zoe - life, and xylocaryon - referring to the fruit). The common name of the species is Bartle Frere Oak. The name Eidothea means ‘divine shape’, and the stories of Eidothea are told in the Homeric Odysseys (Scroll 4:367) wherein she is described as a wise and obliging sea nymph / goddess.

Over the past two months Kooyman has extended the search area for the new species and located a number of additional specimens, (and some significant new populations of other endangered species), but overall only twenty-five mature trees are known, and it looks like the species is restricted to a core area centred on the Nightcap Range. 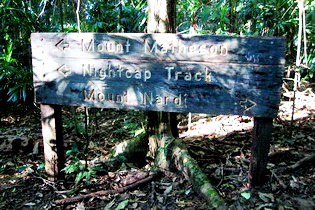 Searches were undertaken as part of Kooyman’s current thesis research through University of New England and as an extension of a project on endangered species with NSW NPWS. Some of the search time has been shared with botanist friends and colleagues Barry Walker, John Hunter (NSW, NPWS), and Andrew Benwell.

While still awaiting formal description and the allocation of a scientific name, the new species on the Nightcap Range has been appropriately christened as the Nightcap Oak by Kooyman. The Nightcap Oak appears to have a very restricted range and a low population size. Such a low population size makes the species extremely vulnerable to extinction, so once the taxonomic description is far enough advanced emergency listing as an endangered species under the NSW Threatened Species Act 1995 will be sought.