Introduction to Gondwana Rainforests of Australia

A brief introduction and history of the nomination of the Gondwana Rainforests of Australia World Heritage national parks of New South Wales (NSW) and Southeast Queensland (QLD), Australia. 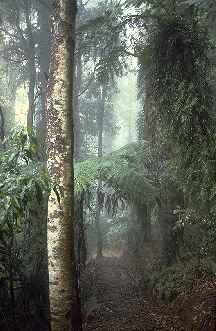 Although rainforests cover only about 0.3 % of Australia, they contain about half of all Australian plant families and about a third of Australia's mammal and bird species.

Selected as World Heritage sites for their exceptional biodiversity or rarity, the Gondwana Rainforests of Australia have an extremely high conservation value and provide habitat for more than 200 rare or threatened plant and animal species.

The property currently contains more than 50 World Heritage listed national parks, flora reserves  and nature reserves of various rainforest types, which streches for more than 500 kilometres , from Gloucester in the NSW Hunter region, just north of Sydney, to Boonah in QLD, more than 900 kl to the north.

The parks and reserves are variously comprised of four of the five major recognised rainforest types, and include some of the few remaining stands of old growth (undisturbed) forest in NSW.

The balance of listed "properties" are made up of large remnant pockets and regrowth areas of rainforest, which were able to meet the criteria for World Heritage listing.

History of the Nomination

After being independently evaluated by the International Union for the Conservation of Nature, the nomination was presented to to the United Nations Educational, Scientific and Cultural Organisation (UNESCO), by the Australian Commonwealth Government in 1985.

Queensland additions to the nomination since the original submission have increased the number of reserves and national parks in the property , with that nomination formalised in 1994, and renamed the “Central Eastern Rainforest Reserves ”, or CERRA.