The Paths of Yoga - Unity in Diversity 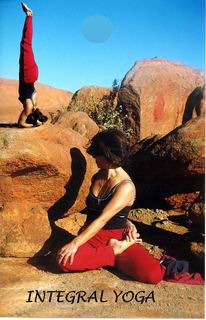 The word Yoga comes from the Sanskrit word 'yuj' meaning to yoke, join or unite.

It is a philosophical science of self - realization and transformation, independently guiding one into recognizing his fullest potential and purpose in life (Essence of spirit).

The origin of yoga pre-dates Indian Hindu and Buddhist religions and in that context, Yoga is not a religion.

In Yogic philosophy we have three bodies; the Physical, Subtle (astral) and Causal (spirit), which is the path to the integration of self or "self realization".

By acknowledging and integrating the individual aspects of ourselves from the physical, mental and emotional we can achieve a contented, balanced and above all useful life.

Traditionally the knowledge of yoga (investigation into the nature of the inner and outer realities of existence) was handed down orally from teacher (guru) to student.

There are however, six main Indian philosophical systems (Darshanas) or classical points of view that integrate ordinary perception with experiencing the essence or spirit of life's values.

The six systems are:


It was on Sri Patanjali Maharishi's "Yoga Sutras", that Yoga today has laid its foundation.  An integrated and concise text based on the above philosophical systems, it was written over 2000 years ago.

Known as Patanjali's Eight Limbs of Yoga, Ashtanga Yoga is still one of the timeless and most effective classical yoga texts to expound the obstacles to inner freedom, ignorance, false perception and why we suffer.

Through the "eight limbs" one can attain the goal of perfection, and expand the knowledge of ones microcosmic connection to the wisdom of the greater macrocosmic matrix of life.

Thus the unfoldment of the various paths of yoga came about.

Bhakti Yoga - a devotional form of yoga by learning to relinquish ego through ritual and be of heart-felt service in action and thought. Cultivates a happy and compassionate disposition for the greater good.

Jnana Yoga - the path to self-realization and union with supreme soul through enquiry and meditation on the higher truths, laws of esotericism and philosophy.

Mantra Yoga - uses sacred Sanskrit words of power (invocations & affirmations) through repetitive chant, and sound to bring about harmonious balance within the energetic fields (koshas) of the three bodies.

Yantra Yoga - uses the visual form of Mantra, sacred art as a focus to recognize different states of mind (the fabric of consciousness) ultimately transcending the mundane mind and accessing ones innate essence of being.

Hatha Yoga - a purification of the physical body through asana and pranayama to balance the left/negative-female, and right/positive-male energies to bring union and balance within the whole body, mind, spirit dynamics.

Emphasis here is on the union of these energetic polarities (Ida & pingala energies) to clear emotional and mental blockages and prepare the student to move straight to the spiritual source of self-realization.

Kundalini Yoga and Tantra also concentrates on the balancing the (Ha) ida and (Tha) pingala nadis which act as conduits of energy in the subtle bodies. By cultivating mind/breath fusion, prana (life-force) is accessed to harness balance to the left, ida and right, pingala nadis which spiral along the spinal channel -Shushumna.

The spiral junctions of Ida & Pingala Nadis form concentrated vortices of energy called chakras. It is through the devotional mind that relinquishment of ego and purification takes place within each chakra.

This ultimately awakens the coiled serpent, Kundalini at the base of the spine, to move through Shushmna Nadi and thus merges the creative Shakti life force with Shiva (divine godhead).

Karma Yoga - A discipline in the understanding of ones character through performing actions, not determined by expectations, unselfishly for the welfare of others and the fulfilment of Dharma (lifes purpose).

Laya Yoga - a system of experiential state of absorbtion based on the Kundalini Kriya Yoga.

Raja Yoga - strives for the divine within through mind control, and is linked with Patanjalis Eight limbs of Yoga, and embodies the spirit of an integral yoga system.

Through these Traditional branches and systems of yoga, new modern day branches have creatively diversified to hand down the wisdom and lineage of the guru through their own personal experience of practice (sadhana).

In this way Yoga becomes an ongoing spontaneous experience of life, traditionally evolving but not fixed.

Today some of the popular schools of Yoga - Iyengar, Ashtanga, Satyananda, Integral and Shadow, derive their teachings from these branches and in keeping with tradition, contribute to the greater good of society.

Filomena Aversa (Dip.Venkatesa Integral Yoga Academy) currently teaches yoga philosophy and Pranayama at the Yogalates and Yoga Arts schools in Byron Bay and in Murwillumbah on the north coast of NSW.

She has been a Yoga practitioner, yoga therapist and Yoga Teacher for over 16 years, and her practical dedication in Iyenga, Hatha Yoga and Pranayama spans this tiime.

Her practice continues under the tutelage of accomplished masters, including Shandor Remete, Rose Baudin, Zen Master Hogen Yamahata and the Integral Academy of Australasia.

If you'd like to explore yoga options, couples and small groups can take advantage of Filomena's instruction in range of Yoga Holiday Packages, based on the Integral Yoga system, at Akasha Byron Bay, Northern Rivers, NSW, or on Bali Yoga Retreats.

*Dualism: The doctrine that reality consists of two basic opposing elements, often taken to be mind and matter (or mind and body), or good and evil.